As they accepted their award from the stage Saeidi said “…music is about love. Music is against war.” Disraeli emphasized, “We come from Israel. We come from Iran. We come from the United States and Canada and our music was made in freedom, peace, self-inclusion, and love. This award shows that music that’s made like this has reason to be appreciated and can build bridges, not walls. We need this more than ever now.” Opium Moon stands for their message that music does not recognize any kind of boundaries, whether of race, religion, or nationality.

The band’s collective credits include collaborations with everyone from Jimmy Page and Robert Plant, to the LA Philharmonic, George Clinton, Herbie Hancock, and Green Day. You’ll find them in massively popular film scores like Transformers, Game of Thrones, Frozen, and Pirates of the Caribbean, and among them they have scored more than 45 films. Their self-titled debut album landed on four Billboard charts, and the group’s recognition in the Best New Age Album category is its first GRAMMY Award win.

Violinist and lead vocalist Haydn says, “Our music is the embodiment of the change we’d like to see in the world. We are humbled by the honor of this award and how it will spread our music and its message far and wide.”

Hailed as, “…spacious and timeless,” by Bob Boilen of NPR Music and celebrated as, “…the soundtrack to an exotic, hazy, languorous dream, a sensual/spiritual trip into the mystic,” by KPCC’s Steve Hochman, Opium Moon features Lili Haydn on violin and vocals, Hamid Saeidi on santoor (Persian hammered dulcimer) and vocals, Itai Disraeli on bass, and percussionist M.B. Gordy.

Band members have played with musical greats including Roger Waters, Sting, B.B. King, and Josh Groban. The band members’ prolific work has been featured in some of the most iconic moments in popular culture, such as Mad Men, Battlestar Gallactica and Buffy the Vampire Slayer, and together they have sold more than 100 million units worldwide.

Opium Moon’s eponymous debut was released in July 2018 by Be Why Music, the California-based record label devoted to music for uplifting humanity. Be Why Music’s roster now has two Best New Age Album GRAMMY winners in three years. 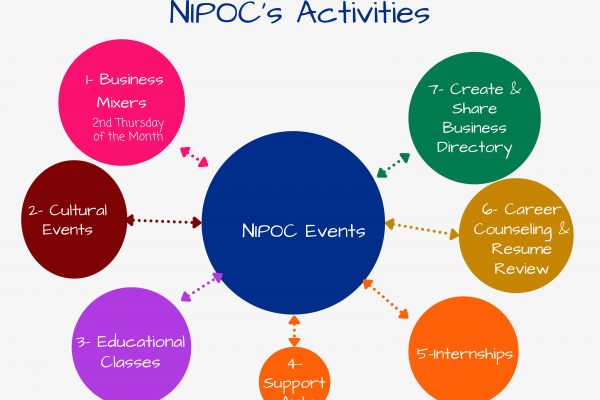 Monthly Business Mixers, usually held on the second Thursday of the month. Typically, these meeting include a speaker presenting various